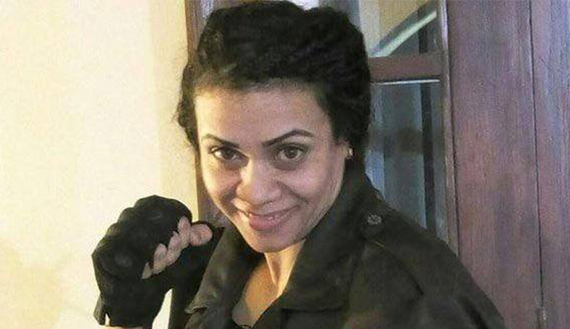 In recent years, seeing an Egyptian woman as a security guard or a police officer has become a normal occurrence. However, there was still one area where Egyptian women had been shut out as far as personal defense – bodyguard. The bodyguard is a position where self defense techniques are used most frequently, especially out of the three aforementioned jobs. Hind Wajih has always been obsessed with self defense since childhood – karate, taekwondo, aikido – you name it and she’s practiced it! And now she is Egypt’s first female body guard.

She is the first officially certified female body guard in Egypt’s history but she’s not stopping there. She is also well on her way to becoming a police officer and is also the first female in Egyptian history to teach males self defense as well. She believes strides like these have taken Egyptian women so long because many women hang out to a mentality that is completely antiquated. For example, many Egyptian women believe that by training in any sport where there could be muscle development that would distort their female form thus making them less feminine.

Wajih is now encouraging all Egyptian women to disregard their traditional views of what women can and can’t do within traditional society and to get out their and follow their ultimate dreams – whatever they may be.

You can read more on the story here.