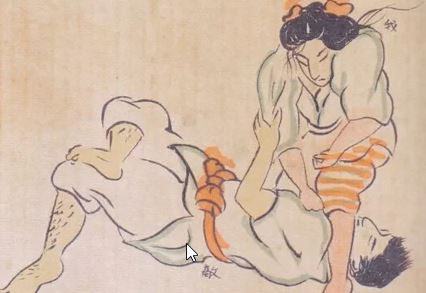 A book that was written over a hundred years ago has just been translated and, as it turns out, it is an advanced guide for women teaching them to defend themselves from male attackers and any form of rape or molestation. The extremely interesting part about this is how advanced and seemingly effective the techniques are. At the very least, they absolutely hold up today. The book was written by a woman named Nobatake Yaeko and the books title directly translates to “Self Defense for Women.”

The book contains a litany of self defense techniques for women including arm breaks, throws and even an advanced abdomen strangulation technique where a woman uses her thighs to strangle a mans abdomen thus rendering unable to breathe which stops the attack. The book also contains a portion where all of the weak points on a man are illustrated. These weak spots, if struck hard and directly enough, will render a man unconscious as well as possibly unable to breathe. All of the techniques in the book are actually, in one way or another, taken from jiu jitsu – the main principal of which is to use your opponents weight and momentum against them which is why it is known as “the art of gentleness”.

These techniques and this book, apparently, all came from a movement back in Japan in the late nineteenth century called the Women’s Self Defense league. The Woman’s Self Defense League was a way for women of Japan at the time to stick together, watch each other’s backs and, most of all, learn effective self defense from one another. This League was absolutely no joke. In fact, it actually handed out awards to women who had successfully defended themselves from being assaulted. You can read more about these techniques, Nobatake Yaeko or the Women’s Self Defense League by clicking here.