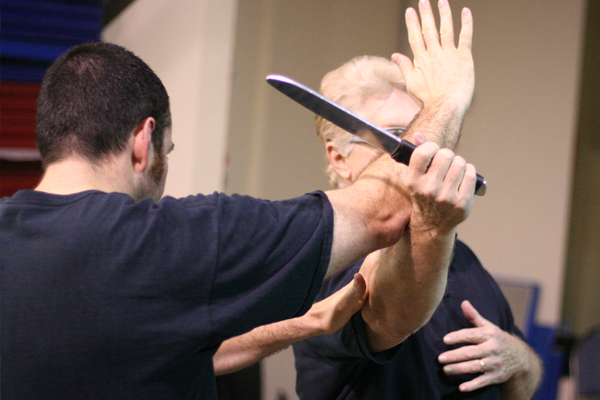 There are numerous options of self defense to prepare yourself for an encounter with an armed attacker. Although confronting an attacker is a frightening situation, it is important to have a plan and most importantly to be composed so that you can think and come up with a defense strategy.

It is not advisable to fight against an armed attacker except as a last resort. It would be ill advised to challenge an attacker because of property. Consequently, the most important strategy of handling an armed attacker is by using verbal self defense. It is very important to find out the demands of your attacker before you begin any confrontation. It may be something you can forgo, or a situation you can negotiate your way out of by giving up something to avoid further hostility.

It is important you think ahead so that you can figure out what you can give up and what you can’t. For instance, if an armed attacker wants your money, you are presented with a choice to give up your money to end the conflict, but in cases such as sexual assault or other forms of physical attack you don’t have any alternatives but to face the attacker. In some cases you should go along with what the attacker’s demands as a strategy to avoid being injured. After all, in self defense, your cooperation does not imply any form of consent, but rather it is just a strategy to make it out from the situation alive

In most cases you will also find that most strategies that apply in confronting an unarmed attacker will come in handy even when the attacker is armed. Part of these strategies is being conscious about your environment. This may be to establish whether you can get any help from the people are around you, possible ways to get away or people or areas to avoid. Furthermore, you should also try to ascertain what kind of a weapon the attacker is wielding. For instance, if it is a knife you will require a different response from a situation where the weapon is a gun. If the weapon concealed, just to be safe, you should rely on your gut feeling.

In cases where the attacker is threatening to use the weapon, the most effective strategy is to remain calm and think. Afterwards, you can also use verbal self defense after properly analyzing the situation. This entails starting a conversation with the attacker to either divert attention or to negotiate your way out of the situation. In several occasions, people have found it effective to ask the attacker about his interests, family or just chatting to diffuse the tension in the situation. Other forms of verbal self defense such as distraction will also ensure that the conflict does not escalate.

When the time is right, create an opportunity to escape or strike. Make sure that you are very alert to identify and take advantage of any window of opportunity that may arise. You should not make any sudden movement unless you have come up with a strategy to resist. If decide to resist the attacker, create or wait for any distraction, and then strike the body parts that are very vulnerable to injury or pain i.e. eyes, throat, knees, nose and groin area.

If you are able to snatch the weapon from the attacker, there are several options to consider. However, it advisable to throw it far away from the attacker, do not use the weapon to threaten the attacker because he may overpower you and use it against you. Make sure you have a good layout of your surroundings, so that you are in a position to leave quickly or to find something to shield your body. If you are in a room, make sure you identify the exits, any objects that can be used as a shield or a weapon and the suitable places you can hide.

If you are in a situation where an attacker is actively using his weapon. For instance, firing a gun, the first course of action should be to get out of range and take cover. Ensure you stay low and run in a zigzag pattern to keep a distance of at least 40 feet from the attacker.

If the attacker is coming at you from a distance wielding a knife, keep a distance and throw anything you can toward his face especially his eyes to ensure that he is visually incapacitated. Shield yourself with an object to protect your vital organs and parts of your neck. When an opportunity arises, strike the eyes, knees or the throat of the attacker.

If the attacker is holding a knife to your body, find an opportunity to escape. If possible strike his vulnerable areas and grab the knife as you make your way to the exit. In such an encounter, you can sustain injuries, but you will have a good chance to escape.

You should also keep in mind that you may be injured, but still survive. This is to ensure you remain calm to continue defending yourself in the moment.